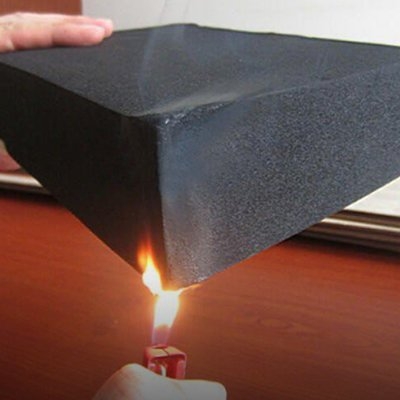 Fire Retardant special foams are formulated in a way which not only slows down the burning rate of foam but also get self-extinguished. We offers FR foam in various densities with various FR standards like CAL – 117, UL-94 HF1, BS-5852, FMVSS-302 and IS-7888 international and domestic test standards by a significant mark.

Flame Retardants Are Categorized As Either Additive or Reactive.

We uses non-halogenated phosphate Additive flame retardants. It demonstrates superior long-term efficacy as compared to chlorinated phosphate esters by virtue of its lower volatility upon ageing.

During combustion, the phosphate forms a char layer on the surface of the foam, acting as an insulator for the remaining material. The char layer acts as a barrier between oxygen and polymeric decomposition gases. There is convincing evidence, that in oxygen-containing polymers, phosphorous containing flame retardants can increase the char yield. Char formation implies that less of the molten polymer substrate is converted to combustible gases, so the mass loss is reduced. Secondly, char formation is often accompanied by water release, which dilutes the combustible vapours, making the vapours less combustible.